Okay, so I'm probably one of the few guys around that gets overly obsessed with his weight.  Not for any vanity-related reasons, mind you, but because of my fanatical obsession with cycling and the "weight weenie" aspect of wanting myself and my bike to be as light as possible.  So, when I first heard about the new Fitbit Aria wi-fi scale I just couldn't resist picking one up.  I've been following the goings on at Fitbit for awhile now, and their cool Ultra device has become pretty popular with people who want to track all their physical activities, calorie consumption, and sleep patterns.  I never bothered with the Ultra since I already use a Garmin 500 to track all my cycling activities, but when I heard about the Aria I just knew I had to have it.  What's cool about it is that not only does it show you your weight, but it also displays/records your body fat percentage and uploads all of the recorded data to the internet, which you can view by going to the Fitbit website or through their free iOS/Android applications.  The scale can provide this data for up to 8 people in your household, and by default it makes each person's data completely private.  You can weigh yourself as many times as you like throughout the day, and each time it will add the latest update to your online profile. This is great, because sometimes it's useful to record your weight at the beginning or end of each day, or before/after working out.

My Aria was waiting for me when I returned from a recent East Coast conference, and for the most part setting up the device was a breeze.  I loved the packaging it came in, and dare I say that opening up the box was somewhat akin to opening up one for an Apple product...nice little touches and very pleasing to the eye.  As soon as the box is opened there are specific instructions for going to the Fitbit website to download a setup program.  I did this, and here's where I encountered a bit of a problem.  Turns out that the setup program requires that your machine be connected to the internet via a wireless network - more on this requirement in a second.  Anyway, after unplugging my ethernet cable I tried running the setup program several times, but each time it kept telling me that I was not using wireless.  I almost decided to give up for the night, but just for fun I rebooted my machine, reran the setup program, and whoa-la...it worked this time!  Once the setup program runs it asks you to create a Fitbit account if you don't already have one, and then it "finds" your Aria on the wireless network, asks a couple of basic questions,  and automatically configures the device.  I was wondering how this was going to work, because the Aria has no buttons to speak of and so I was curious as to how you would go about configuring it to connect to your wireless network.  But what I believe the setup program is doing is copying the wireless network settings from your computer and then using those settings within the Aria to spoof the identify of your computer...very clever indeed!  And the fact that the Mac address for the Aria doesn't show up as a registered device anywhere on my wireless router seems to support this theory. 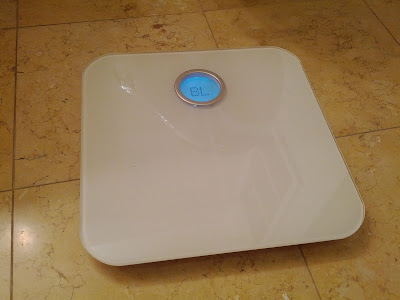 The Aria comes in a black or white finish, with a clear Gorilla Glass-like overlay that you step on.  The LED display is bright and readable, and overall the unit is very stylish and modern.  After using it for a few days I can safely say the unit works exactly as advertised and performs flawlessly.  The only bummer that it's constantly reminding me of how surprisingly high my body fat percentage is!
Posted by Unknown at 7:04 AM No comments: Links to this post