Those of you that have known me for awhile are aware that two of my personal hobbies/passions are cycling and tech gadgets.  Well, a few months back I decided to pull the trigger on a new bike, and after going back and forth on all the available options I finally settled on the recently released Parlee Z5 SLi frame, married with Shimano Dura-Ace components.  And not just any Dura-Ace component group, mind you, but the latest DI2 electronic shifting version of it.  That's where the gadgetry comes in, and the resulting combination is oh so sweet.

The idea of electric shifting is not new, and in fact back in the 90's the French component manufacturer Mavic came out with the Zap electronic shifting system...and sure enough, yours truly was one of the early adopters of it.  I will say this...when it worked it worked pretty well, but after a few unfortunate mishaps I gave up on it and went back to a more traditional setup.  Then finally, a couple of years ago Shimano announced the new DI2 system, and knowing how good Japanese companies do electronics I just knew that one day I would have to have it.  One of the issues with DI2, though (well, other than the expense), is that with all the electrical wiring running around it doesn't make for a very clean look on the bike.  So, that's where the Parlee comes in.  I've always admired Parlee for their handiwork and they were always near the top of my list for my next frame.  And I always respected the fact that they only cared about making the best frames possible rather doing anything gimmicky like weird tube shapes or loud paint schemes.  So when the Z5 SLi came out I just knew I had to have it.  The "SL" stands for "super light", and at 820 grams it is indeed one of the lightest frames in the world.  And the "i" in SLi stands for "internal routing", which means the frame is pre-drilled to allow the electrical wires to run inside of the frame vs. routing them externally and looking a tad ugly.  The result is simply awesome!

I think pictures are worth a thousand words here, so let the cameras roll.  First up, here is the bare frame and fork, just after I unboxed it at my bike shop.  See the hole close to where the down tube meets the heat tube?  That's for the internal wiring: 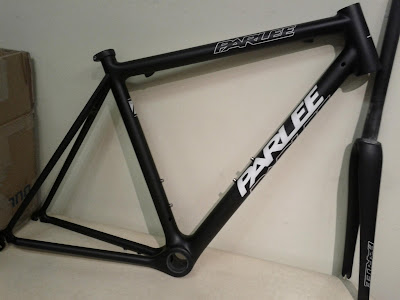 I debated quite awhile between going with a traditional gloss finish vs. the matte finish that is very popular today.  I'm glad I went with matte, as in addition to looking great it has bit of stealthiness to it that I like a lot. And the Parlee guys did a fabulous custom paint job for me with the white racing logos, the stealthy head tube logo and just a hint of pink in a couple of places.

And just to prove I wasn't lying earlier, here's the frame up on the scale...yup, just .82 kg: 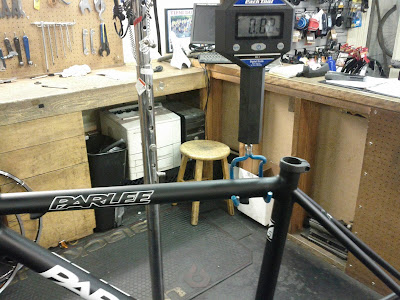 One of the cooler things I did was to substitute the stock Shimano lithium iron battery with Calfee Design's new version which mounts inside of the seat post.  Normally the DI2 battery would need to be mounted somewhere on the frame itself; again, rather ugly.  Here's a picture of the seat post (incl. battery) being installed in the frame: 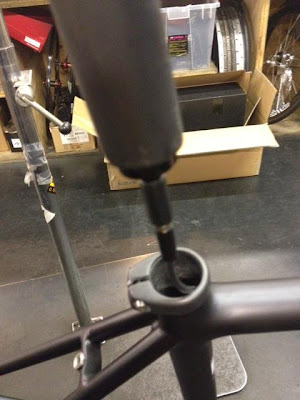 In case you're wondering if you need to remove the seat post in order to recharge the battery, the answer is no.  The latest version of the Calfee battery allows you to charge it through a connector attached to the rear derailleur...very cool indeed!

I was told by my shop that getting all the wiring in place within the frame was a bit time consuming.  I guess this next picture (my favorite) says it all: 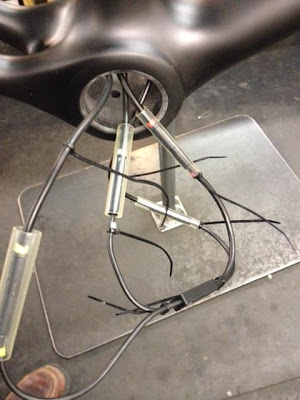 Is this a bicycle or a computer?  All those little zip ties actually serve a purpose...while inside of the frame they "hug" the surface of the frame so that the wires don't rattle around in there...pretty clever.

The electronic shifting is amazing.  The levers are located in the same locations as the non-electric version, but they act a bit more like buttons than levers since there's not as much throw to them.  As expected shifting is precise and flawless...it's also dead simple to make micro-adjustments to the rear derailleur - just hold the button on the "control panel" for a couple of seconds and then tap the levers in the proper direction.  Even more impressive in my opinion is the front derailleur; in addition to the flawless shifting the front derailleur auto-adjusts itself depending on the chain angle...no more having to manually trim!  You can also shift while braking as well as shift both derailleurs simultaneously - very nice! 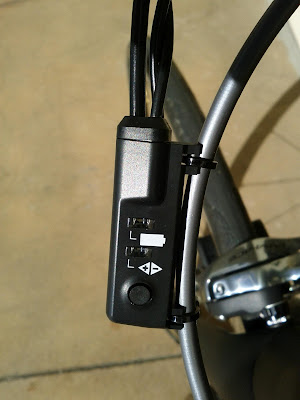 
Here are a selection of other pictures: 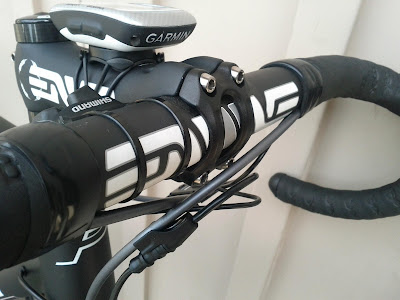 The "cockpit".  Lots of wires and cables here, but all nice and tidy.  Enve bars and stem.  BTW, Enve also supplies Parlee with their forks. 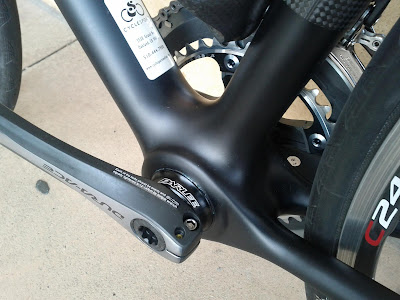 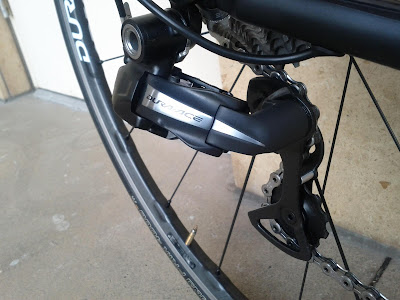 Dura-Ace electric rear derailleur - note the cabling being routed inside of the chainstay. 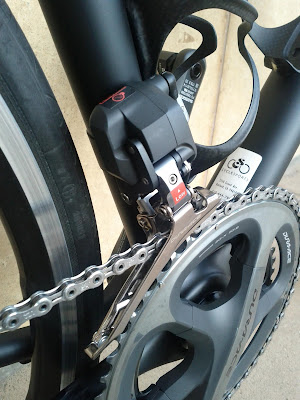 The "brains" of the system sit here on top of the Dura-Ace front derailleur. 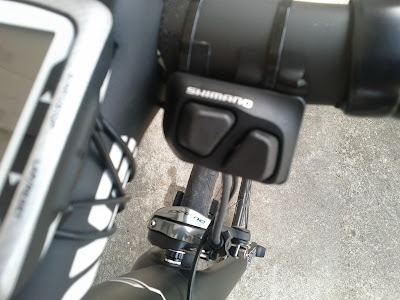 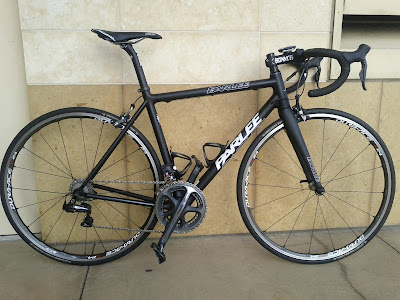 The satellite rear shifters make it super easy to shift without having to take your hands off the bars.  The only "cost" is the additional 70 grams in weight - weight weenies be warned!

And here is the finished product. In addition to the Dura Ace gruppo I went with Enve for the seat post, bars (deep drop) and stem (12 cm.), Look Keo Ti pedals, San Marco Concor saddle (which I may switch out for something else) and Arundel carbon bottle cages.  The only items I didn't purchase new are the Dura-Ace C24 clincher wheels which I bought last year and my trusty Garmin Edge 500 cyclometer.  I also considered going with compact cranks as they are so in vogue now, but since the Euro pros aren't using compact I couldn't bear the thought of doing so myself!

The total package as seen weighs in at about 14 lbs, 12 oz, a bit under the UCI weight limit which means I can't legally ride the Tour de France :-)  Once I finally settle on a saddle the weight will go down an additional ounce or two, as the one I'm using now is not a carbon-railed version.  If I wanted to I could have gone much lighter, but I wanted components which I could use day in and day out under any conditions, with no hassles and with zero compromises.  The bike rides like a dream - fast and responsive, stiff but not overly so, and very comfortable to boot.  And of course, that flawless shifting!  Thanks a bunch to the folks at CycleSports Oakland who worked with me off and on over many months to get to this point.  Special thanks to Chris Blease who continually put up with all my questions and obsessive-compulsive behavior, and also many thanks to Tim Parker whose mechanical abilities are second to none and who is the only person I've let touch my bikes for most of these past 20 years.
Posted by Unknown at 9:53 AM 1 comment: Links to this post