Going the Opposite of Cord Cutting - The Tivo Stream


You would think that my being a tech geek/early adopter type means that I would have been one of the first to jump on the "cord cutting" bandwagon and dump my cable subscription.  And trust me...the thought of cutting out a $100+ monthly Comcast bill, along with the usually horrible Comcast customer service department, crosses my mind each time I see that charge on my Visa statement.  But attractive as that sounds, and despite the fact that I am downloading/streaming more and more of my video content, I can't seem to escape the clutches of my cable subscription.  One of the main reasons for this is the obvious one for many us, namely live sports.  Until the major networks come up with an equitable solution for cord cutters to access their live content over the internet this may be a huge stumbling block for me and other sports fans.  The other reason is simply convenience...having all my video content stored on an easily accessible hard disk still beats picking and choosing content from various sources (Netflix, iTunes, Hulu, etc.) and having to deal with the occasional internet connectivity issue while downloading or streaming.

Which brings me to Tivo...I've used quite a number of DVRs over the years, and their UI's range from simply horrible (Comcast) to pretty decent (DirecTV) to Tivo, which is still the best of the bunch despite not having done much in recent years to advance their technology.  The one nice thing about Tivo, though is that it's an open platform, so as a result there are some extremely clever and useful 3rd-party projects such as PyTivo and kmttg that extend the functionality of the platform.  I recently decided to upgrade my unit, because believe it or not I watch enough TV that I occasionally run into situations where I need to record more than two shows at once...their new Premiere 4 allows you to record up to four shows concurrently.  One of the other reasons I picked up the new unit is because Tivo was offering a bundled deal which includes the Premiere 4, a MoCA adapter which basically allows you to attach wired devices to your network via your home's existing cable coax, and their relatively new Tivo Stream mini-device which lets you stream and/or download content from your Tivo box to your iPad.  The device itself is small (4"x4") and super simple - just plug in the AC adapter and connect to your home network with an ethernet cable and you're all set to go. 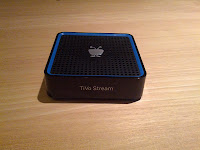 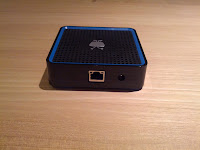 The Stream allows you to stream content from your Premier that was previously recorded or is currently recording, and it also lets you downloaded content directly to your iPad for offline viewing...both of these functions are performed using the free Tivo iOS app.  As you might expect the app looks and feels similar to its TV sibling, so there was zero learning curve involved.  One cool feature is that you can "slide" the playback marker to any specific time within the program - something that you can't do with the TV remote.  For the most part everything worked pretty flawlessly and as advertised.  If you began watching a program on your TV, paused it and later resumed watching it from your iPad, it remembers where you previously left off and picks up from that point...and vice versa. The one annoying bug I found is that if you stream a program that is still being recorded, your streaming gets interrupted when you get to the location where the Tivo was recording as you began your streaming session...you have to jump back out to the "Now Playing" list, select the program again and then it will resume streaming from the point where it left off. 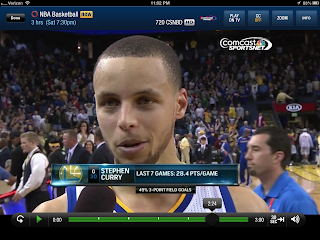 Will Tivo sell many of these Stream units?  Probably not, as it's really a niche product at the moment with a fairly limited audience.  First off, it only works with the iPad, so if you're thinking about using it to stream to your desktop/laptop computer or Android device you're basically SOL.  Secondly, the streaming function only works within your internal home network, i.e. you can't stream over the internet...which is really a shame because if it did this then I would no longer have a need for a Slingbox.  And lastly, it obviously only works with Tivo and specifically with later modeled Tivo's...and your Tivo needs to be ethernet or MOCA connected to your home network to boot.  However, if you can deal with these limitations then the Stream is a nice add on and essentially turns your iPad into an additional (and portable) home television.
Posted by Unknown at 3:28 PM No comments: Links to this post