Let me just start out by saying that the Nexus 7 is unquestionably the best Android device available today! It's lightning fast, noticeably faster than any mobile device I've used...and I've used a bunch of them.  I don't know if it's due to the quad-core processor or the smoothness of the Jelly Bean OS...probably a combination of both.  Applications download/install several times faster than on other devices, and when you go into 3D mode on Google Maps it's absolutely amazing how quickly all the building structures take shape.  I bought the device intending to hand it to one of our developers in order to test our Android app, but I've held onto to it for over a week now and I'm not sure I'm going to relinquish it...sorry David!

There are a number of other reasons to like the Nexus 7.  The build quality is excellent, as is the screen resolution.  For lots of people the form factor of a 7-inch device is advantageous to the 10-inch iPad because of portability.  One of the nice things about its size is that I can store the device in the glove compartment or in the center console of my car, something I absolutely can't do with the iPad.  The smaller/lighter form factor will also be preferred by a lot of people who read books, though I suspect magazine readers may not think the same.  If you rely heavily on Gmail, Maps and other Google apps like I do then there is no comparison between the way they run on the Nexus vs. the iPad...the latter seems stuck in the stone ages.  Battery life is also outstanding, on par or maybe slightly better than the iPad.  And perhaps its biggest advantage is the price...at $199 it's priced the same as the mediocre Kindle Fire and and blows it away in just about every respect.  And that price is less than half the cost of the entry-level iPad.

Quite a bit has been written recently about Android 4.1, aka Jelly Bean, particularly the sheer speed and smoothness of the OS.  In addition to that Google is really trying to play up its Play Store (no pun intended) as well as the integration with all of its cloud-based services.  For example, after going through the setup process my homepage shows a collage of content I have stored in Google: 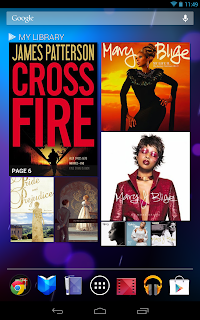 Perhaps the coolest Jelly Bean feature is Google Now, which is best described as an intelligent extension to the notification system.  Google Now will automatically display "cards" based on some of your common activities.  For example, I checked the score for a recent Giants game on the device, and ever since then it's been display cards for each of the Giants games, keeping me up to date on the scores.  Ditto for the weather.  And it even goes beyond that, bordering on creepy.  The other day I was reading an article on TechCrunch written by a guest author who is employed by one of the local VC's.  After finishing the article I decided to hop onto the VC's website to check out the author's bio...this was done on my laptop.  A few minutes later I picked up the Nexus and noticed that a new notification had popped up...it was driving directions and estimated drive time from my home to the VC's office.  As I stated...a bit creepy, but useful nonetheless.

So the big question is...will I replace my trusty iPad with the Nexus 7?  It's a really, really close call...but probably not.  I do like the convenience of having 4G connectivity when I need it, and unfortunately the Nexus only supports wifi.  And though I love the whole concept behind Google Now, I also think that the technology is something I'd rather have on my smartphone than on my tablet device...now, if Verizon can get off their butts and deliver Jelly Bean to my Galaxy Nexus I'd be set!   I also think the iPad still gets the nod as the superior reading device, especially for reading magazines/newspapers in landscape mode.  In fact, some of the Android reading apps don't even support landscape mode on the Nexus, probably due to the fact that at 7 inches the screen isn't conducive to a quality reading experience in landscape.  But at $199, it's easily the best value out there and is worth serious consideration for anyone needing to buy a tablet...regardless of the price point.
Posted by Unknown at 6:18 PM No comments: