Being the Android fanboy that I am, I had my eyes on the latest "pure Android" device, the Galaxy Nexus, ever since it was launched a few months ago.   The device comes pre-loaded with the latest and greatest Ice Cream Sandwich (ICS) version of Android, with lots of new bells and whistles and a much improved user interface.   But alas, it was only available on Verizon and I had been a dedicated (and mostly satisfied) T-Mobile customer for the past 7 years.  In addition to that I felt that this trend towards larger and larger handset screens was not to my liking, and so when I saw that the Galaxy Nexus was sporting a 4.65-inch screen I figured I really didn't want to deal with anything that bulky.  So, given these two issues I decided I would just stand pat for awhile and see how things were going to play out.  And as it turned out, Google did start rolling out ICS to existing Nexus S users such as myself, and since the Nexus S is no slouch of a device I figured I would just hold onto it for awhile and wait for the ICS update.  And sure enough, back in December I was able to download and install ICS without a hitch, so I thought I was golden.

Well, I quickly found out that ICS on the Nexus S had a couple of major issues, notably excessive battery drain and a general sluggishness with most applications.  In fact, shortly after Google started deploying ICS to Nexus S owners they abruptly halted the deployment, probably because everyone was having similar problems to mine.  It was around this time that I also started losing my patience with T-Mobile, as there were just too many places I was going that had little to no reception, and even in the places where there was reception it was often the case that all I could get was 2G....WTF, that just doesn't cut it in today's world.

I waited and waited for Google to address the ICS issues, but no dice.  And then I heard about this great deal that Amazon had for the Galaxy Nexus, just $99!  So, I immediately jumped on the deal, had my phone in a couple of days (with number ported) and I was in business.  And boy, I can't believe I didn't switch to Verizon sooner.  I'm getting spectacular 4G coverage in most places....check out this speedtest report which I ran near my office: 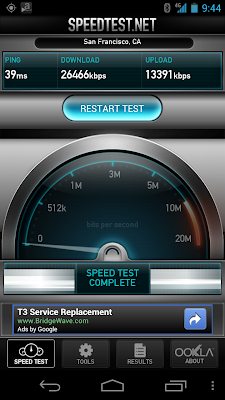 ICS on the Galaxy Nexus doesn't seem to have any of the battery issues I experienced with the Nexus S either.  I consider myself to be a pretty heavy smartphone user, but despite that I am able to go nearly a full day with the device off of a single charge; noticeably better than my Nexus S even before the ICS upgrade.  And the dual-core processor in the Galaxy is so damn fast....it's night and day compared to any other phone I've used in terms of the speediness of apps.  This, along with Verizon's great coverage and speedy 4G network have me in smartphone heaven at the moment.  Do I still think the phone is too big?  Yeah, it would be perfect if the screen was closer to 4-inches even...but I'll overlook this given all of the phone's other advantages.

Oh, but now it's time to play with my new "retina display" iPad...so stay tuned!
Posted by Unknown at 10:33 PM No comments: Links to this post